The wind from yesterday evening continued on through the night, and hasn’t really let up at all today, but it was joined with some rain. Our first order of business was checking out of the apartment and getting to the main train station (Vienna Hauptbahnhof) to drop out duffle bag in a locker. We lucked on this run because it was still dry outside for the run between the apartment and the subway entrance.

We then took the subway downtown, but by that time the rain had started. We had planned to do inside activities today due to the weather, but still got soaked in between the subway station and the entrance to Hofburg Palace. We took a tour of the Silver Collection and the Sisi Museum. The Silver Collection is really just many displays of the different place settings (plates, bowls, cutlery) that were used throughout the years (centuries) at the palace, some of which are still used today. It was actually surprisingly interesting for a collection of plates, and included some surprising details like the fact that they switched from precious metal settings to porcelain settings because they melted down the precious metal ones to pay for the Napoleonic wars. It did eventually just become more and more plates, however.

The second part we went through was the Sisi Museum, which was mostly about the life of Sisi, also known as Elizabeth, Empress of Austria and Queen of Hungry by her marriage to Franz Joseph I. I didn’t know anything about her going on, so it was interesting to hear about the myths and rumours that have surrounded her, both while she was alive and since her assassination, and comparing that to the reality. All in all it was well presented. This part carried on into a tour of the royal chambers of both Elizabeth and Franz, which was interesting to see.

With our tours over, we were hoping that we had spent enough time for the rain to have stopped, but that was not the case. Hungry, we looked for a nearby cafe, but couldn’t find anything without a line out the front door, and we weren’t about to stand outside in the rain voluntarily. The backup plan was to hop back on the subway and head back to the main train station. There, we grabbed some food and hung out inside waiting for our train.

We got on our train to Eisenstadt around 1640, a little bit before it’s departure at 1648. It’s a popular train, and runs more like a subway line than the other intercity trains we have been on. The ride was smooth until we got to Neuseidl am See, at which point a long announcement was made, and everyone, looking annoyed, started packing up their things. We asked the girl next to us what the English translation was, and the reply was “this is the end of the line, train isn’t going any farther”. We eventually figured out that there was a bus that would get us the rest of the way, and, after crowding on with everyone else, we were on our final leg to Eisenstadt. It looks like the wind took out the power to part of the track.

In Eisenstadt we were greeted by Chantal’s friend Elsbeth and her partner Richard. Our day had ended well with an excellent dinner and good company. Tomorrow we will explore the countryside of Austria. 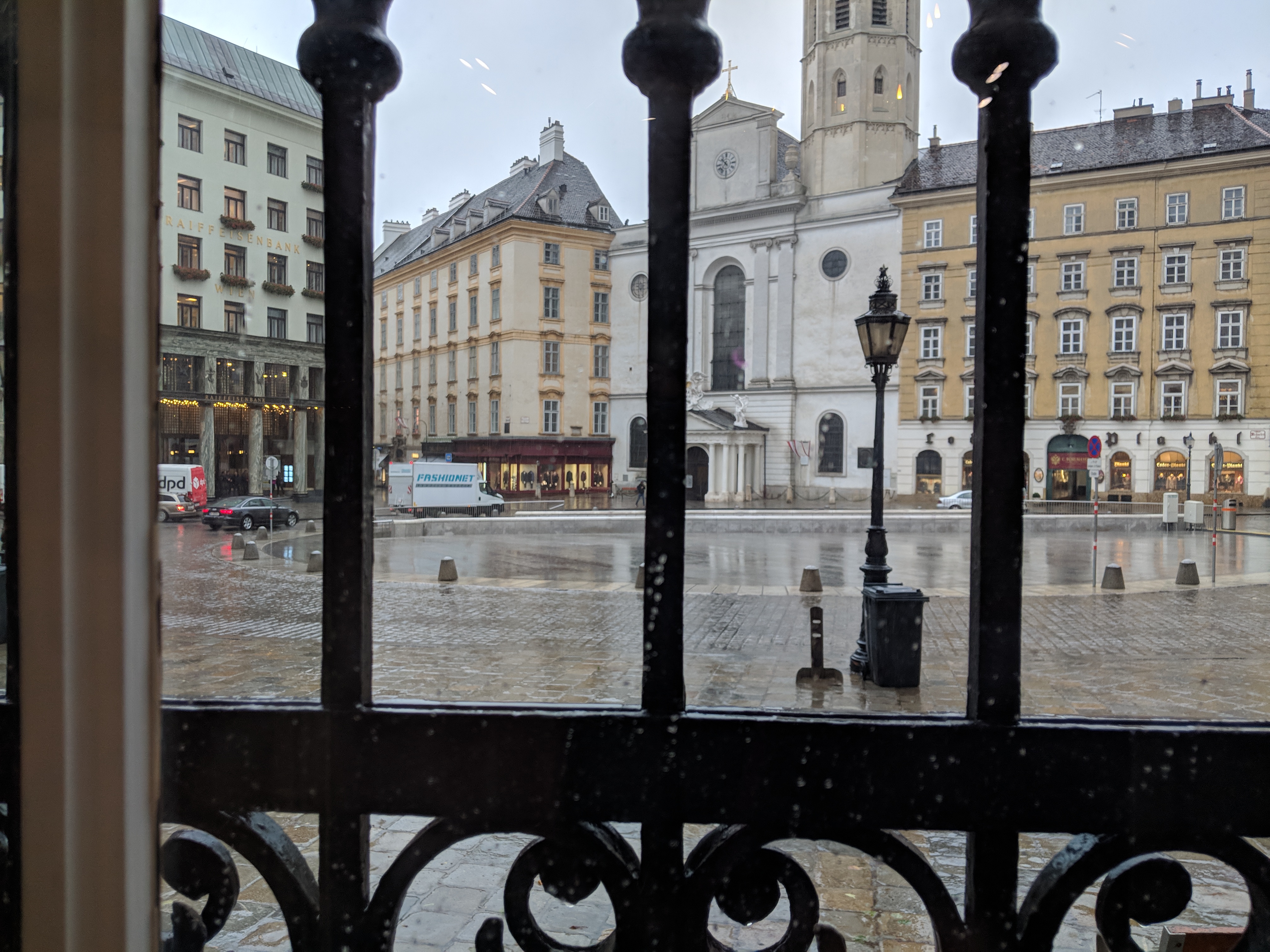 The rain as best viewed: from inside. 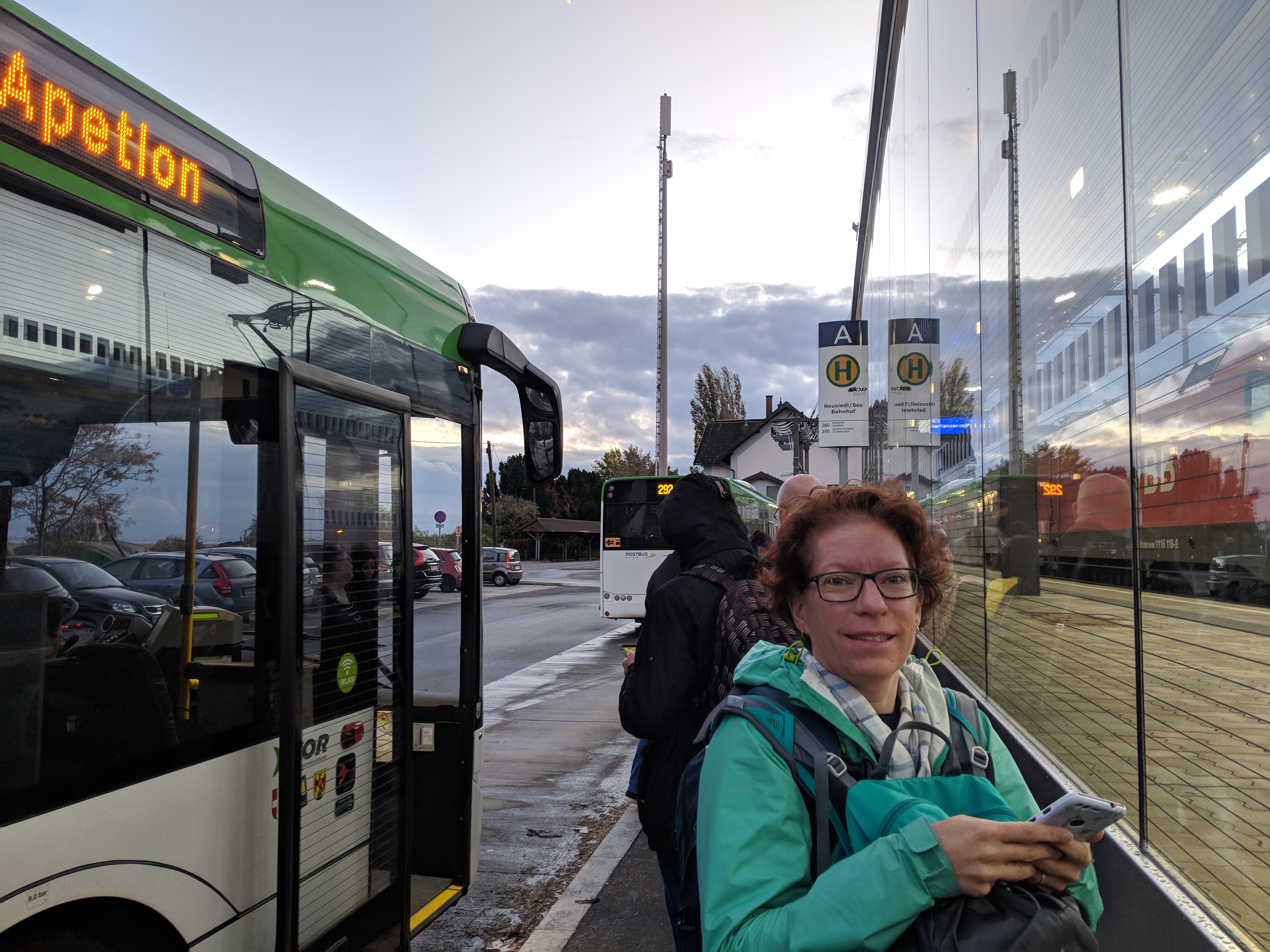 Figuring out the bus connection after our train stopped.